Sunglasses and glasses can be easy to retouch, or they can be a real pain – it all depends on the photography stage, how photographers managed to shoot them. It's all about reflections and symmetry.

In this image, you can see some random objects reflecting in the glass. It's your work to remove them.

On this image, there are no reflections, that's because the photographer is holding a piece of paper the glasses are lying on, curving it a bit so that only the background gets reflected. It's much easier to retouch, of course.

Same situation here: there is a huge reflection of the photographer hiding behind a piece of paper, which doesn't really help much. To retouch an image like this, you'll have to spend a lot of time.

And this image, with almost the same angle as the image before, has no reflections at all because the photographer held a piece of paper in front of the sunglasses. I don't know what kind of online store you're dealing with, whether photographers are doing their job properly or not. I just want to emphasize the importance of photography setup. Trust me, once you work with the images that were shot properly, your tolerance to poorly shot images won't be so high. It's not a big deal to hold a piece of paper, it only takes seconds, but in Photoshop it will take quite some time to get rid of the reflections. Before we learn how to do that, let's see what typical problems sunglasses and glasses usually have and how to solve them.

First of all, the will almost always be overexposed. There's a lot of light in the studio, on the photography station, and they are made of plastic. Use the Burn Tool on them to make the temples at least a bit darker. Use the Midtones or Shadows range and a lot of Exposure, like 70%. Even with the “Protect Tones” checkbox checked, the color will probably be off in the end, so colorize the affected area with the Brush in Color mode afterward, picking a sample from some normally exposed area of the frame.

Time to crop to get rid of all the extra background and rotate. If you don't have much experience, rotating can be easier if you draw a guide first, rotate the image and then delete the guide. Then isolate it with the Magic Wand, just be careful and set the Tolerance to something really low, and restore the shadow under the glasses. That's pretty much all you have to do.

You will still have to deal with reflections even if the setup is good. It just happens. But reflections won't be too big or hard to remove. First of all, select the lens. You might be tempted to use the Quick Selection tool here, but please, don't. It's not able to make a smooth selection – you'll get a rough edge even with the “Auto Enhance” checkbox ticked. Use the Magic Wand instead and smooth the selection additionally with the Smooth command, which can be found in the Select menu, Modify submenu, but you'd better assign a shortcut for it. Another way how you can make a selection smoother is to switch to the Quick Mask mode and use the Median filter. After that just grab the Normal non-transparent Brush and paint over the problem area. That's it.

Sometimes there will be a lot of reflections, and you won't be able to paint them over with a solid color. Some lenses will be filled with a gradient like color, and you'd better not change it. It's not really hard to remove reflections like this, you just have to select the lenses first. I'll load the selection from an alpha-channel because I don't want to waste time and make you watch how I do it step by step with the Pen Tool, the process is pretty evident and doesn't require a demonstration. When you have the selection, switch to the Gradient Tool. Pick one color sample from the bottom of the lenses, press X to switch the Foreground and the Background samples and pick another color sample from the top of the lenses. Now you can use the Gradient Tool. While your selection is still active, drag the gradient tool from the top to the bottom of one of the lenses, and they will be filled with a color gradient, similar to what was there before, just sans the reflection. Don't forget to check the “Dither” checkbox, or there will be some banding on the gradient. If you think the result is too smooth, add some Noise, like 1 or something like this. Glass doesn't really have a texture, so you can easily replace reflections with solid color or gradients.

Okay, so what if the reflections are so horrible that they obscure the temples? How can we retouch an image like this one? Well, don't worry. We just need a couple of layers. And there's a good thing – the glasses are symmetrical. It means that we only have to retouch a half. Use the Pen Tool and select the temple tip. Copy it to another layer. After that, make a selection of the lens, this time the Quick Selection tool can do it. Copy it to another layer, just make sure you copy from the Background layer, not from the layer with the temple tip. Then Ctrl-click on the layer with the lens to select it, pick a proper color from somewhere in the image and fill the selection with this color by using the Fill command or just painting it over with a big brush. Now, on to the temple tip. Ctrl-click the respective layer to select the tip, and also don't forget to make this layer active. The temple is pink, so pick a color that is a bit lighter than the frame and use it to fill the contents of the selection. This is good enough, but if you are willing to spend a bit more time on this image, switch to the lens layer and use a soft brush to paint a shadow under the temple tip. It will look more natural.

After that just Flatten the image, which I usually do via a shortcut, select the retouched half of the glasses and copy it to another layer. Then press Ctrl-T to bring the Free Transform controls. At this point, many retouchers will right click the image, use the Flip Horizontal command and then move the layer and nudge it to fit the other half of the image. Don't do it just yet, as there's a more easy way. In the upper left corner of the screen, you can see nine little squares. The center square is white, which is the default setting. Click on the middle right square to make it white instead, and then right-click the image and use the Flip Horizontal command. The image will be flipped around the right edge and you won't have to move and nudge it so much. Our work here is done.

I'd also like to say a few words about color correction. As I said, there's a lot of light in the studio, and sunglasses are usually made of metal or plastic. They reflect light really well and they often come overexposed and they really lack contrast. It's not like there's 100% probability, we already saw quite a few images with decent contrast, like this one. But be on a lookout, and if that happens, make sure you increase the contrast during the color correction stage.

This image is a good example of your typical low-contrast glasses. If you open it in Photoshop and use the Auto Contrast command, you'll see how it changes. The deal is that the original image didn't have the black point set, which is an important part of color correction for the web. The Auto Contrast command does exactly that. If the change between the original image and what you have after applying the Auto Contrast is really drastic, it can mean two things. The image is either not supposed to have the black point, which happens with light colored items, or it was really lacking contrast from the start. The latter is often the case with sunglasses and jewelry. So make sure you don't forget about the black point when you work with images like this one.

The Auto Contrast command is a good way to check if your image lacks contrast, but it's not a good way to actually work with contrast. Use the Camera Raw instead. There's a high chance that all the images from the same shooting will require serious contrast alteration – you can use the same settings on them all. 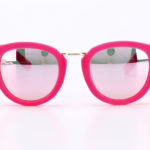 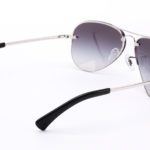