Shooting trousers on a mannequin is not an easy thing. A mannequin is hard and solid, and not all the trousers can fit it well. Putting tight trousers on mannequins is physically hard. This problem can be solved by shooting on a person instead. It usually works well with all sorts of trousers, skirts, and jeans.

These jeans were shot on a person, not on a mannequin. You can see this person's knees in the holes. On the so-called mannequin shots, photographers make models stand still and straight, and retouchers cut the garments out as if it was a mannequin instead of a model. It doesn't really matter if it's a human being or a plastic doll, the retouching process stays the same.

Using a mannequin would be better for the website consistency, of course. When you shoot trousers on models they tend to look a bit different depending on the model wearing them.

In the most simple cases, it's just isolation. Make sure the image is rotated correctly, as it's very important that the mannequin images do not lean to any of the sides. Remove the background – which is easy in this case as I can use the Quick Selection tool. There's a cardboard label at the side, which should be removed, too. The only thing that's left is make the waistline straight. Most online stores have some standards for their waistlines. In some it's always straight, in others it's curved in a particular way. I prefer straight, as it's easier to maintain than a specific curve. Best way to do it is use the Liquify filter. Some retouchers cut it in the process of isolation, but this method is not really good. I'll show you why you shouldn't do it even if it's a bit faster.

Instead of using the Quick Selection tool, I'll use the Pen tool to isolate the trousers from the mannequin. So, I'll just cut a straight line through the belt instead of making a curved line. The result doesn't look so bad, but only from afar, because what I did was just cut a part of the garment, you can see it, and this is definitely not a good way to work. The other reason, which is not as evident as ruining the item's integrity, is that perfectly straight lines are weird. You can't make a perfectly straight line with the Liquify filter no matter how hard you try, but it's easy to do with a Pen or a rectangular selection. These precise laser cuts do not look natural, as we're working with clothes, not boxes. It will be more evident if I cut the legs as well. So please, don't do it. Work carefully with the Pen tool to make slightly curved lines, not straight.

Some trousers will be harder to correct, especially if the legs look different. The Liquify is your best friend for this kind of a job. Start with a large brush on a zoomed-out image, decrease the brush tip size and zoom when you need to act more precisely. Sometimes you'll have to use a tiny brush and spend a lot of time, it depends on the trousers. Make sure the waistline is straight, and both legs are straight or slightly curved, if they are curved in reality, and do not look different from one another in the end.

There's a problem that occurs when trousers are shot on mannequins, like in this image. The crotch area looks wrinkled. Once again, in some online stores, this kind of wrinkles would be perfectly okay. But in case you need perfectly retouched trousers, let's see how it can be done. First of all, I'll do the Frequencies Splitting with the action, the Radius doesn't really matter as this tiny texture will be pretty smooth after resizing anyway. But let's say 3 or 4. I'm going to work in the crotch area with a soft brush, so let's protect the edge by clicking on it with the Magic Wand and expanding the selection by the same value that was used as the radius while splitting the frequencies. The whole area is too wrinkled for the Mixer Brush to be used, so I'll use a normal brush instead, soft and transparent.

Pay attention to the fact that the trousers become darker down from the waist, so I have to be careful to pick the right color sample, something between the waist area and the knee area. Then I'll paint over the wrinkles to cover them up. This will inevitably affect the brown pattern, but it's okay, I'll get it back with the History brush later. When the whole area finally looks more or less flat, and the brown pattern is not covered with blue paint, I can switch to other tasks. One of them is the crotch area outline, as the legs here look different. I'll use the Pen tool to make a curved path and fill it with white. Good.

Now, onto the isolation process. In this case, it's possible to use the Quick Selection tool, I'll just erase this hand first to help this capricious tool. Make sure that the Auto-enhance checkbox is checked, otherwise, it doesn't work well. And watch it when you isolate, so that it doesn't eat away anything from the garment. Next step is Liquifying. Waistline first, legs last. There are two pockets here, don't push them inside, just make sure they are symmetrical. And just a bit of close-up work on the left leg. That's it, now the trousers look really decent, having all the work I've done in mind.

Not all the garments will let you use the Frequency Separation method. Like these trousers, for instance. A large texture like this will look extremely weird if you try to smudge the low frequency layer. Don't do it. A hasty approach is not acceptable here. Take your time and use the clone stamp. First of all, I'll make a crotch cut with the Pen tool and invert the selection to protect the edge. Then I'll use a soft solid stamp, not transparent at all, and work on this dark wrinkle. It's not easy as I have to be very careful about the source and the destination, so it might take some time. When you can't use frequencies, use the Clone Stamp, it's good.

Now, look at the sides. They are extremely wrinkled, too. Most retouchers that I know would just grab a pen and cut the wrinkles away, giving the trousers a slim fit. If it was a couple of millimeters, I would do the same. But not here, too much has to be cut to fix the whole thing. So I'll do the opposite. I'll use the Pen tool to make a straight line along the leg so that it keeps its width. Then I'll use the Clone Stamp, make sure the Aligned checkbox is checked, and fill the insides with texture from a nearby area. The seam gets destroyed in the process, but it was so crooked that there was no point in wasting time trying to save it. Much better now!

The same can be done on the other side as well. I will make another path, and with the same path, I'll also fix the width of the leg, as the other leg is actually wider than this one. So as they get narrow, I ignore the fact and make a curved line across the background. Then I'll just stamp the whole side with a well-aligned sample, and that's it. I can't say I did it in no time, in fact, it took quite some time. But the result is worth it, especially if you want the trousers to look perfectly smooth. I won't be showing any other work on this image, such as Liquify or isolating, as I have something even more wrinkled and nasty in mind. The point was to show you how to remove wrinkles on textured items, and how to fix legs if they look different. We don't remove seams on a regular basis, but if it's a pair of jeans or trousers it's okay because in most cases seams are not visible in the first place. No one will miss them.

Now let's summarize what you've learned about trousers on mannequins. Make waistlines straight, make both legs look the same, remove wrinkles, reshape the crotch area, cut away the small bulges and use the Clone Stamp when necessary to maintain a nice edge and symmetrical shape. Flip it if you are sure that's what you need. 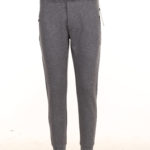 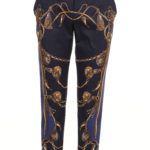