Not all the clothes on mannequins are as easy as a skirt. Most of the time the final image requires at least two shots to be combined: the front and the backside of the same garment. After the mannequin is removed, it’s time to assemble the garment to achieve the ghost mannequin effect. Your goal is to insert the backside into the front and make it look natural by adding a shadow to it. This is sometimes called the “neck joint” on the internet, but I prefer the “backside insertion” as it's not just about the neck. We often have to insert other parts, like a bottom. Neck joint sounds somewhat limited compared to what exactly we are doing with mannequins. Anyway, here's the tutorial:

To actually insert a part of an image into another image, adjust it, and add a natural-looking shadow to it sounds like a lot of work. Fortunately, as all the things you do are pretty much the same every time, you can record an action and do it in just a few seconds instead of wasting minutes. I’ll show how it is done both manually and automatically. The neck joint action I use in the video is available in the store:

This is one of the few cases in product image editing when you need layers and layer effects. Normally we try to keep our images as flat and simple as possible, but it’s inevitable with the mannequins.

So we cut out the front side and put it on a separate layer, then cut the backside out, not the whole thing, but a piece of a necessary size to fit in the neck opening. It’s better to cut more and then erase the rest than cut less and fill in the gaps. Insert this piece into the previous image right under the layer where the front side is, then transform the backside so it fits perfectly.

Then add a shadow by adding a “drop shadow” layer effect, or just draw it with a black brush with 10% opacity until you’re happy with it. As for me, I prefer the “Drop shadow”, because if I just put it into an action, I can ensure that all my neck openings look exactly the same, which is good for the image consistency. So let’s do it the right way. To add a shadow, we have to make the top layer, which is the mannequin front, drop a shadow on the backside layer. To do so, make sure the top layer is active and then click on the Fx button, which is the Layer Styles button down there in the Layers panel. Then click on the Drop Shadow command. I’ll tell you which settings I usually use, but it’s not obligatory, you can come up with something of your own. The most important thing here is to switch the Blending mode from the Multiply, which is the default, to the Soft Light. Otherwise, the shadow will hit the white background as well. But the Soft Light mode doesn’t blend with white or black, so you’ll be okay.

I’m going to add a black shadow with the following settings: Soft Light, Opacity 80%, Angle -120, Distance 45, Spread 16, Size 130. The rest is default. Now it drops a very nice dark shadow inside of the sweater. And if you record it, all this can be done automatically. I’ll show you once again how the backside insertion action works and I’ll be using it from now on so that I don’t have to waste time on these things.

So. To insert a backside correctly, you need to do this: first of all, you have to open two images, where the front side is the first image, and the backside is the second image. The order is very important, as the action uses the “Next image” and the “Previous image”commands, don’t mix them up. What you have to do with the backside is to make a selection of the part you want to insert. You can select just the part, or isolate it on white and select the part and some white background as well. The backside is going to be in the bottom, so even if there is a piece of white background sticking to it, it won’t affect anything. It’s up to you which method you prefer. As for the front, you have to do two things: isolate the whole thing on white, and then make sure there’s a selection around the mannequin. If you just used the isolating action, you can press Ctrl-Z and the selection will be there. If you used it a while ago and did any Liqiufy or erasing or any other transformation on the garment, click on the background with the Magic Wand.

Then all you have to do is run the action while the front mannequin image is active. It will insert the backside and let you transform it. You’ll end up with an image made of three layers. The top one is the front, the middle is the backside and the bottom is the white background. You can then erase parts of the layers to make them fit together nicely and flatten the image. It took me a while to explain how it works, but in real life it’s easy and fast. Especially when you don’t have to struggle with isolation. Watch this:

I open the two images so that the front image comes first and the backside comes last. I select a piece of the backside that I need. I isolate the mannequin, make sure there’s an active selection around it and run the action. Then I transform the backside to make it fit, erase the unnecessary pieces that do not fit from both layers, if necessary. And that’s it.

Sometimes backside insertion is not just about the neckline. Some garments have their back longer than the front. In cases like this one, you have to make sure you insert the whole thing.

This sweater looks almost the same as the previous example, but it’s different. I’ll do the same things: select the backside, but this time the whole back. Then I'll switch to the front image and isolate it on white, making sure the neckline doesn’t include any of the backside parts that can be seen around the neck. Then, after I run the action, the whole backside arrives and it can be fit in both the neckline and the bottom. I can use the Warp function of the Free Transform to make sure it fits both. If the shadow seems not dark enough in the bottom, which can happen because it’s supposed to look great in the neckline only, you can use a black transparent brush to add some more shade, just make sure you Ctrl-click on the bottom layer to select it first. Or you can just leave it like this, it’s not a big deal. After you’ve made sure you did everything well and the mannequin looks nice and tidy, flatten the image and pat yourself on the back.

If you're using your own isolating action, which you have written yourself using my instructions, the last step of the action would be "Deselect". So if you isolate a mannequin with its help, you can press Ctrl-Z to undo the last step and restore the selection.

But if you're using one of my scripted isolating actions, probably from the pack above (free for Mindful Members), you won't be able to press Ctrl-Z to restore the selection. You'll have to press Ctrl-Shift-D instead, which is a shortcut to the "Reselect" command. The deal is that when the script runs, it leaves a single step in the History, instead of filling it with lots of commands. Pressing Ctrl-Z would undo the whole isolation, which is very convenient in case something goes wrong.

In any way, after restoring the selection of the background, you can run the backside insertion action, just don't forget about the backside itself. It has to be located in the next document and selected, too.

After the backside insertion action has finished its work, you might encounter a light rim around the neckline on dark clothes. But in my action, it's already been dealt with, you just have to reveal it. Switch to the top layer and use the History Brush on it, and it will remove this outline.

In some cases, with simple clothes like jackets, it will be enough, as the images will not require any additional retouching. But you have to be lucky to avoid the next steps, like working with the symmetry, cleaning the garment, and removing the wrinkles and the folds. I also have to say a few words about the backside images.

The deal is that you can't just use anything as a backside image, there's a bunch of very specific demands for this kind of a shot. 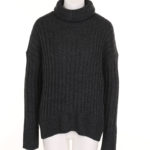 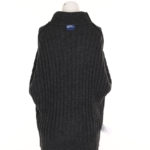