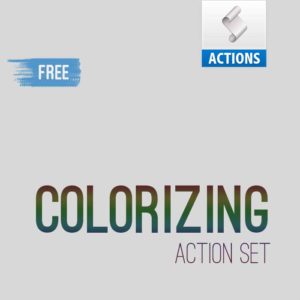 When we retouch model images in huge quantities – like we always do in online stores, we need a quick way to make skin smoother without affecting the rest of the image. Problem is, plug-ins that let you do that on a professional level cost a fortune, and free tutorials suggest you just blur skin, which looks pretty awful. We don’t need that. We just need a way to smooth skin automatically and gently, in a pretty, not so evident way. Now you can do it: just run the action and see it happen.

A set of skin selecting and smoothing actions. Just run the action and you get a smoother skin. Like they do with expensive plug-ins – just cheaper and all simple.

The MODEL set contains three actions. One of them merely selects the skin based on the normal human skin tone, and the other two select the skin and then smooth it. Let's start with the selection. The action is called “select_skin” and all you have to do is open the image containing human skin, and the action will select it, at least most of it. It is not tied strictly to how bright the skin is, so it will work on all the races unless the person is very dark. That's because the darker the color, the less saturation, and if there's no saturation, there will be no selection. But I tried it on many images of many people and it mostly worked.

The same, of course, is true about the garments and other items that are close to skin tone in color, be it hair or shoes. They will be selected, too, so no magic. That's why you should watch it when you use the automatic skin smoothing actions. Let's start with the one that is called “smoothing_little”. It does a little bit of smoothing, and you'd better use this action on low-resolution images, as it works in a very subtle way. After selecting the skin, it applies some smoothing and covers it with grain so that the result won't look blurry. You might not even see it clearly in the video because of the quality loss due to compression, but it's there. I usually use this action on model images when there's a lot of skin in the frame, and I do it after resizing. The action applies the effect to the same layer, so if you want it on a separate layer, don't forget to make a copy.

Let's move on to the strong smoothing action so that you can see clearly what happens. I made it to smooth skin on feet close-ups, but I know that some online stores like their models with plastic skin, so it could be of help. Just keep in mind that it does a strong smoothing. It works best on images about 1000-2000 pixels in height, but it can be used on all images, it's just that the smoothing level will vary. I'll run the action and you can see the effect for yourself. It doesn't take care of blemishes, of course, so you should work a bit with the Healing Brush as well if you have to.

If the shoes are about the same color as the feet, the action will affect them, too. You can use the History brush on any areas affected to restore them to the original state.

Don't forget that the smoothing actions are meant to be used in mass image productions. If you want more control over the process than that, you should consider buying advanced plugins. The actions are simple and that's what makes them fast and easy to use.

Action 1: select_skin
Type: Action, automatic
When to run: when you want to select the skin tone on an image
Requires to run: RGB image. Can be used on a layer
What it does: after tweaking the image with blending modes and adjustments, it then uses the Select Color Range command to select the skin tone
Output: a selection of the skin
User intervention: none
Possible alteration: you can change the Select Color Range command settings, but it's easy to make things worse

Action 2: smoothing_little
Type: Action, automatic
When to run: when you have a model image in need of skin smoothing
Requires to run: select_skin action from the same set
What it does: after selecting the skin with the action from the same set, it applies the smoothing effect, and some grain to make the smoothing less evident
Output: works on the active layer
User intervention: none
Possible alteration: you can change the filter settings to fine-tune the effect

Action 3: smoothing_strong
Type: Action, automatic
When to run: when you have a model image in need of strong skin smoothing
Requires to run: select_skin action from the same set
What it does: after selecting the skin with the action from the same set, it applies the strong smoothing effect, and some grain to make the smoothing less evident
Output: works on the active layer
User intervention: none
Possible alteration: you can change the filter settings to fine-tune the effect

If the smoothing effect doesn't feel right, if you want less or more smoothing or less or more grain, you can adjust each of the smoothing actions. To do so, open the action's contents and click twice on the step before the last one, which is the Camera Raw filter. Go to the Effects tab and you can adjust the Grain effect by twiddling with the three sliders. To adjust the smoothing effect, go to the Detail tab and adjust the Noise Reduction sliders. For the maximum smoothing effect, use the following settings: Luminance 100, Luminance Detail 0. If you need an even stronger effect, you can add some negative Clarity slider value as well. Move the sliders until you are satisfied, then press Enter and the action will use these settings from now on. Don't forget to make a copy of it if you don't want to lose the original settings though.

I'm not sure that anyone needs such terrible plastic-like smoothing, but it's completely up to you which settings to use, and you can also try running the action after making the image smaller, which will increase the effect. That is pure theory, of course, because modern tendencies in product image retouching expect the opposite from us: the less smoothing, the better. And I completely agree with this concept.